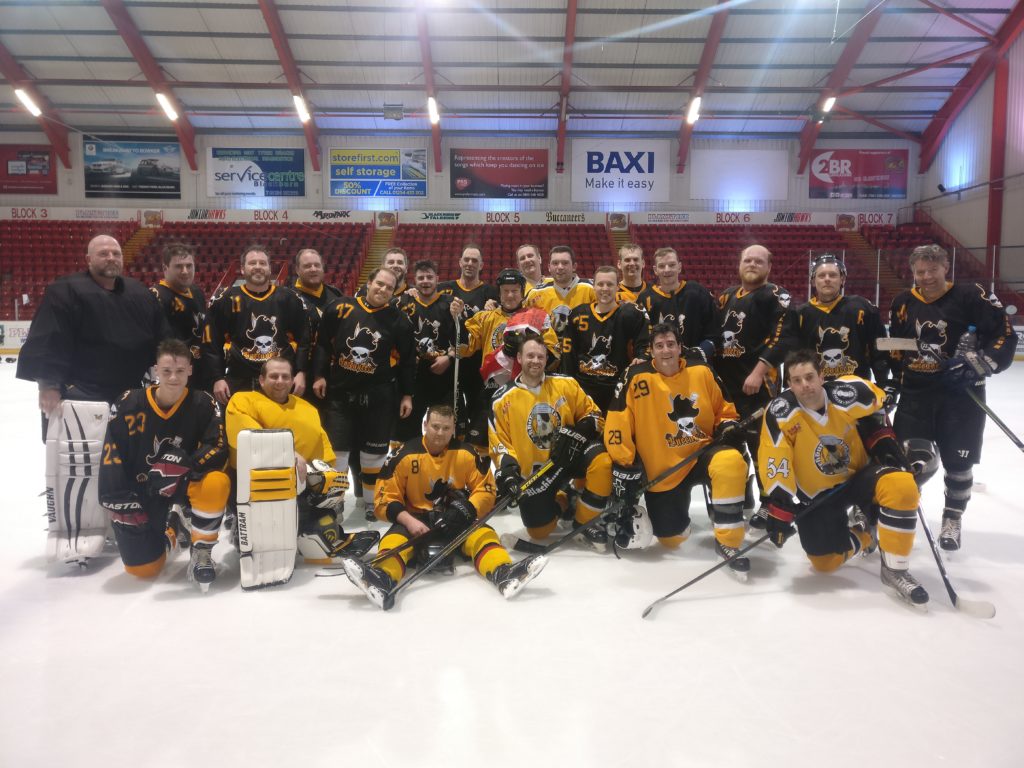 The Blackburn Buccaneers are extremely proud to announce the first jersey retirement in our 11 year history. Following the announcement of his intention to return to his native Canada, Darren Shaw’s number 67 jersey will be retired by the club.

In 2007, Darren Shaw along with Michael McLoughlin, Pete Hird and Gary Buckman decided to start up a new recreational team playing out of Blackburn. They would be the Buccaneers and would play in the black and gold of Shaw’s preferred NHL team, the Boston Bruins.

As someone who gave 100% to the club both on and off the ice, Darren was elected team captain and would wear the ‘C’ for 4 years, growing the club from a few people wanting a bit of extra ice time to a team who travelled the length and breadth of the UK in the name of having fun and playing hockey.

In that 4 years, he was a key player for the Buccaneers and whilst the team didn’t see a great deal of success in the wins column, Shaw was a consistent feature on the gamesheet. Known for always playing the game with a smile on his face, his favoured position would be slap bang on the edge of crease, causing opposing netminders a great deal of frustration with screens and tip-ins.

In 2011, Daz was offered the chance of playing ENL2 with the Lancashire Raptors. After securing his International Transfer Card from Hockey Canada, he was officially released from Whitehaven Community Club and signed for the Raptors. At the ripe age of 40-something, Daz completed two seasons in ENL/NIHL2, one as a Raptor and one as the re-branded Blackburn Eagles.

Daz then took the role of General Manager for the Eagles and working with Scott Barnett as coach, helped to turn the club from the league whipping boys to champions in the space of just 4 seasons.

Since the unfortunate demise of the Eagles, Daz has made a handful of appearances for the Buccaneers and provided some important goals including netting in the Summer Classic playoff final in 2016.

Upon announcing his decision to return to Canada, the club made no hesitation in deciding that nobody else will be eligible to wear the number 67 jersey.

The Buccaneers honoured Daz’s contribution to the club with a one-off Buccaneers Select vs Buccaneers scrimmage at last night’s training session. With Daz wearing the C for the final time, he lined up alongside old teammates, Michael McLoughlin, Michael Walsh, Mark Higson, Dan Watson, Matt Dixon, Chris Beesley, Alan Ridout and  Adam McArdle to take on the current Buccaneers team.

Ahead of the scrimmage, the Buccaneers presented Daz with a commemorative personalised puck to celebrate his time with the club. Needless to say, if Daz ever returns to the UK on a permanent basis, he will always have a spot in the Buccaneers changing room.

The game was keenly contested, goals from Shaw and Walsh put the ‘Legends’ 2-0 up. Both net minders made some outstanding saves, particularly Adam McArdle who was on the ice for the first time in around 18 months. After a short break, the ‘New Buccs’ came out hard and got two deserved goals, including a lovely equaliser from Rob McNair.

With 4 minutes to go, Hudson Nuttall fired past McArdle to make it 3-2 and seemingly wrap up the game. The Legends weren’t done though and with 2 minutes left, pulled McArdle and got the extra attacker on the ice. A bit of a scramble in the zone led to the puck falling to Walsh who made it 3-3.

The game finished a draw which was a fair result for both teams who played some really nice hockey.